It seems there is a mouse in our mast or a rat or at least something sharp that has an appetite for gnawing through main halyards.

For the second time in as many months, the mainsail unceremoniously fell from the sky last night causing no damage whatsoever beyond the involuntary & spontaneous filling of the underwear of the on deck crew always associated with unexpected rigging failures.

The first course of action was to secure the boom which we did with a block and tackle (called a ?handy billy?) which we keep in the cockpit pockets for just such emergencies. Once the boom was anchored between the handy billy and the main sheet we could approach the mainsail and gather it up and flake it onto the boom just as we might when approaching the harbour. With the sail ties on and secure, we put extra securing lines around the boom and down onto strong points on the deck so there was no chance of the boom getting free in the rolling seas. 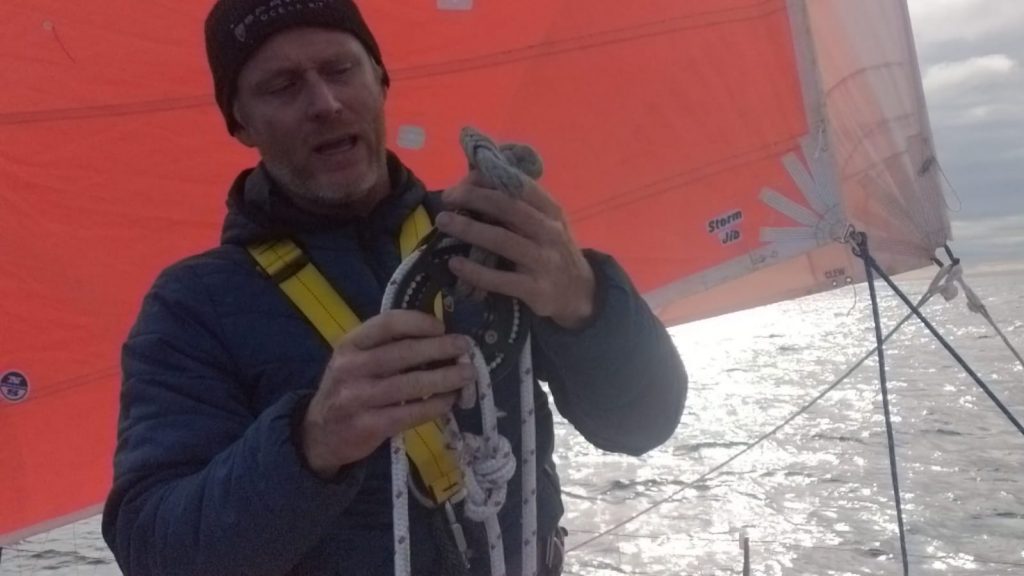 With this being a sail training transatlantic voyage and none of the crew, therefore, being adept enough to climb a 90? mast in darkness and rerig the main halyard ? I elected to sail on into the night and enjoy the stress free sailing made available by running simply by a headsail on a broad reach.

At daylight, I assessed the mainsail, mainsail cars and associated equipment and found no damage. We could also see quite clearly the 1 ft tail aloft of the old halyard. In a Volvo 60 the main halyard is what we call a ?2 to 1? which means it is connected to the top of the mast then comes down and around a block (a pulley) on the head of the mainsail then back up the mast and over another block before turning and coming back down to the deck where the winch is. This means there is over 300ft of line in play which gives us a 50% reduction in the weight of the sail and loads on all the various points involved in lifting the sail. What it also means though is that putting a new halyard together is much more complicated than simply going up and ?popping a new rope in?. 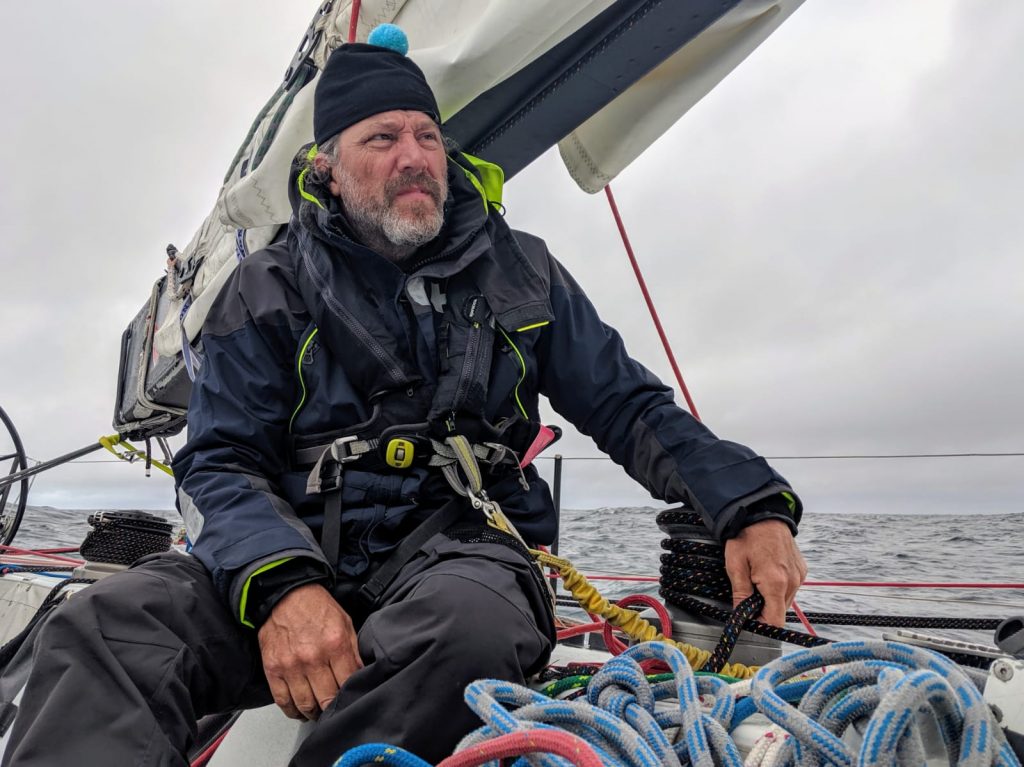 Whilst the technicalities of performing the task aloft were not complex the problem we faced was that the heavy swell was causing considerable rolling on deck and 90? above us whipping the head of the mast through a 20ft diameter circle that it was crossing and recrossing in a matter of seconds. I knew that given my background as a rigger and my experience with such tasks I was the logical choice to go aloft BUT as I am also the person in charge of the vessel with responsibilities to the crew and their wider safety I could not put myself into a potentially dangerous situation purely to gain an extra few knots of boat speed in a non-racing situation.

I, therefore, decided to leave the job until the swell died down ? a considerable feat when testosterone and ego almost demanded that I commit myself to the challenge. People say I am an ?experienced? sailor these days ? what is that? Well, it means I know how to complete the tasks required of my industry and I guess it means I have professional judgement. That means whilst I know when to act and how to act it also means I know when not to act. The metaphorical house of experience is built on the jagged rocks of experience- so she that little voice starts saying ?hey why not give it a shot? it only takes a second to bring to mind a previous similar circumstance where I made the wrong decision and went aloft in heavy swell and then ended up getting beaten against the mast to the point of near unconsciousness while my crew looked on helpless from below. Such ?experience? quickly shuts down any notion of taking that course of action again without the outcome being controllable and safe. So to some of the crew?s disappointment, I asked them to keep sailing under headsail alone and engage the motor to make up the lost speed.

The next day with the swell down and the sun out I brought the crew together and briefed them on the plan, went through the contingencies and subsequently had a very successful twenty minutes aloft completing the task as planned and with no dramas whatsoever. Hey, we even filmed it for our YouTube Channel ?The Mariner? so you will be able to see how it went and what I did when that is released soon. 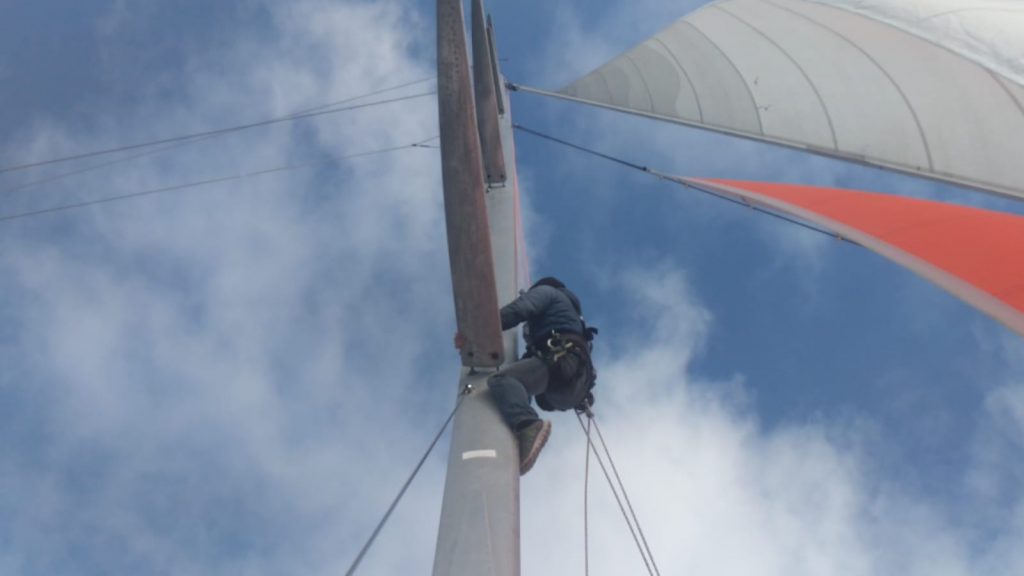 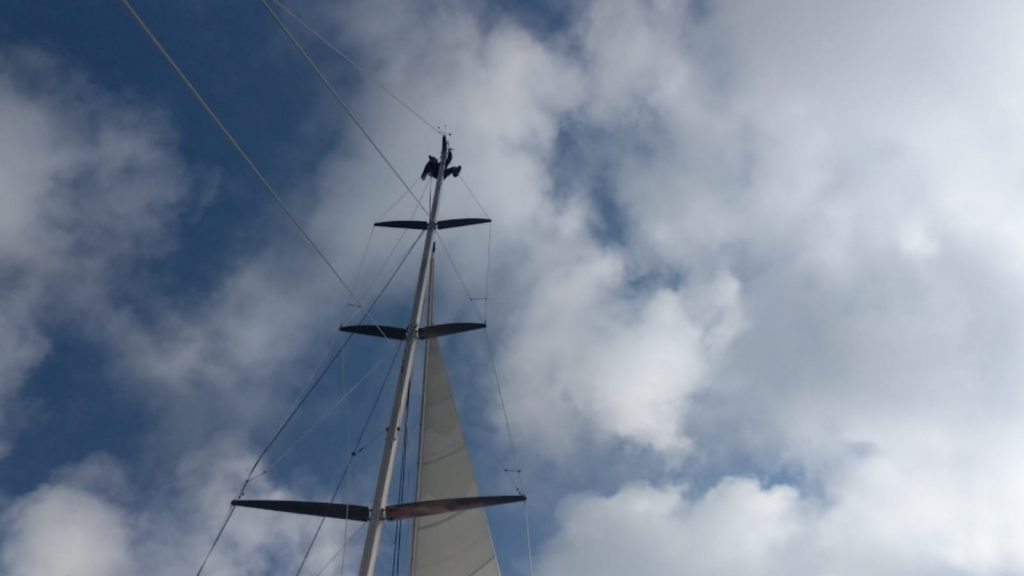 All?s well on a Challenger ? and my feet are safely back on the deck with the mainsail flying once more. Experienced judgement negating as it should the demonstration of an experienced skill set.