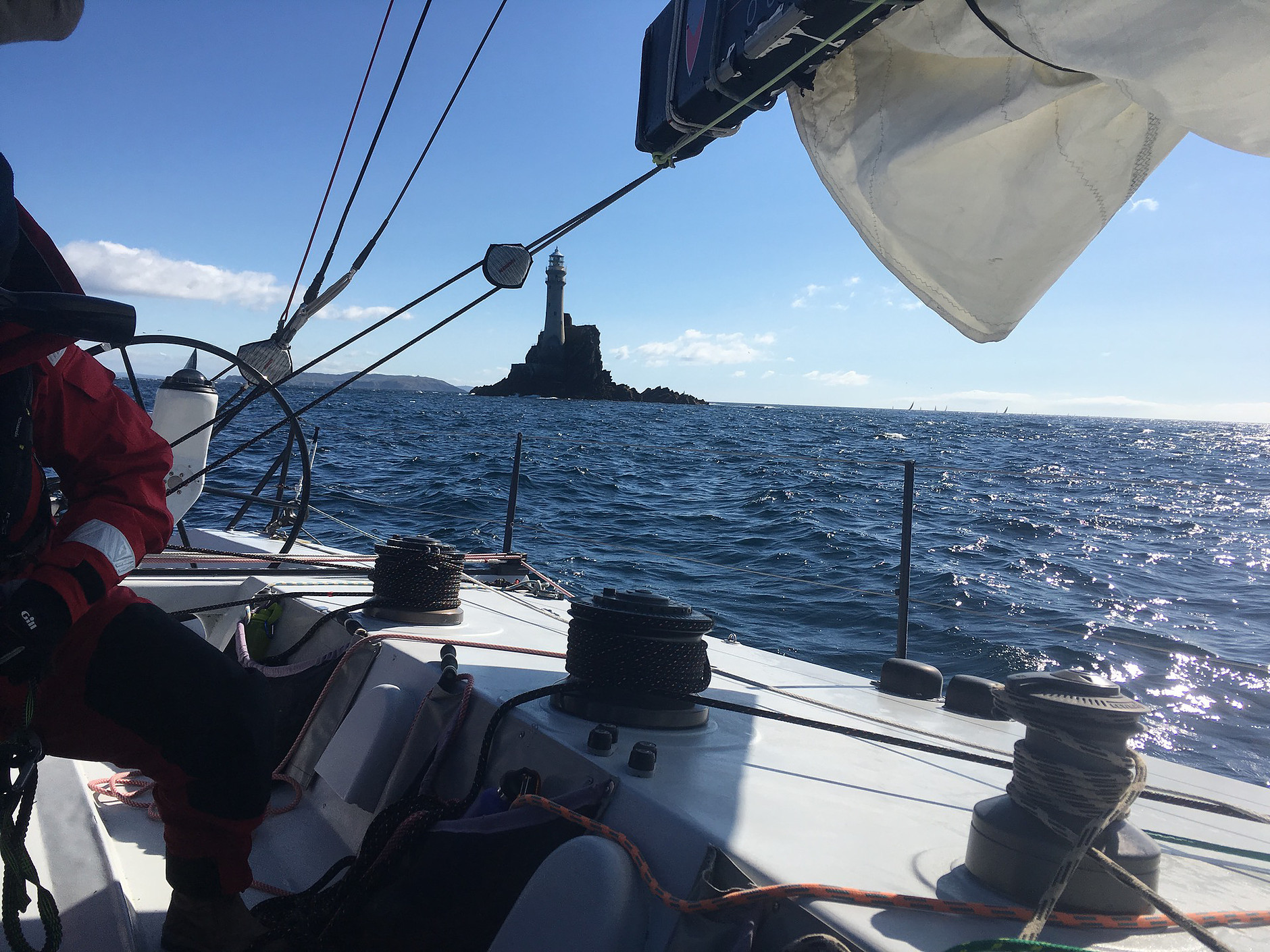 So, yeah the Fastnet. After a protracted period beating myself up for our less than stellar result I have decided two things- 1. Everybody had a great time so actually the result on the water is not important & 2. If I had a time machine there are four things I would definitely change. Let’s address the things I would change first because if I don’t get them out soon I’m gonna pop.
First, we were delayed raising our mainsail before the start- got to fix that straight off the bat. The wind was howling down the Solent, the crew was new on board and for a number of seemingly insignificant little reasons that sail just did not climb the rig with its normal eagerness. It’s a small thing -true and only led to a few seconds delay for us crossing the start line but I have to say it unsettled me and everything felt a little too rushed because of it. Ideally the start should have felt dialled in, focused and relaxed when we were just about to make a very technical beat out of one of the most famous waterways in the world in the middle of a fleet of Volvo 65’s & IMOCA 60’s- and our late approach to the start was just not a good point of origin.
Second I would change out the staysail halyard the night before the race so that it wouldn’t break half way up the beat and push us unceremoniously into using a heavily reefed roller furling jib to make our way out through the Needles Channel- it was slow, it didn’t point at all and it looked like garbage. 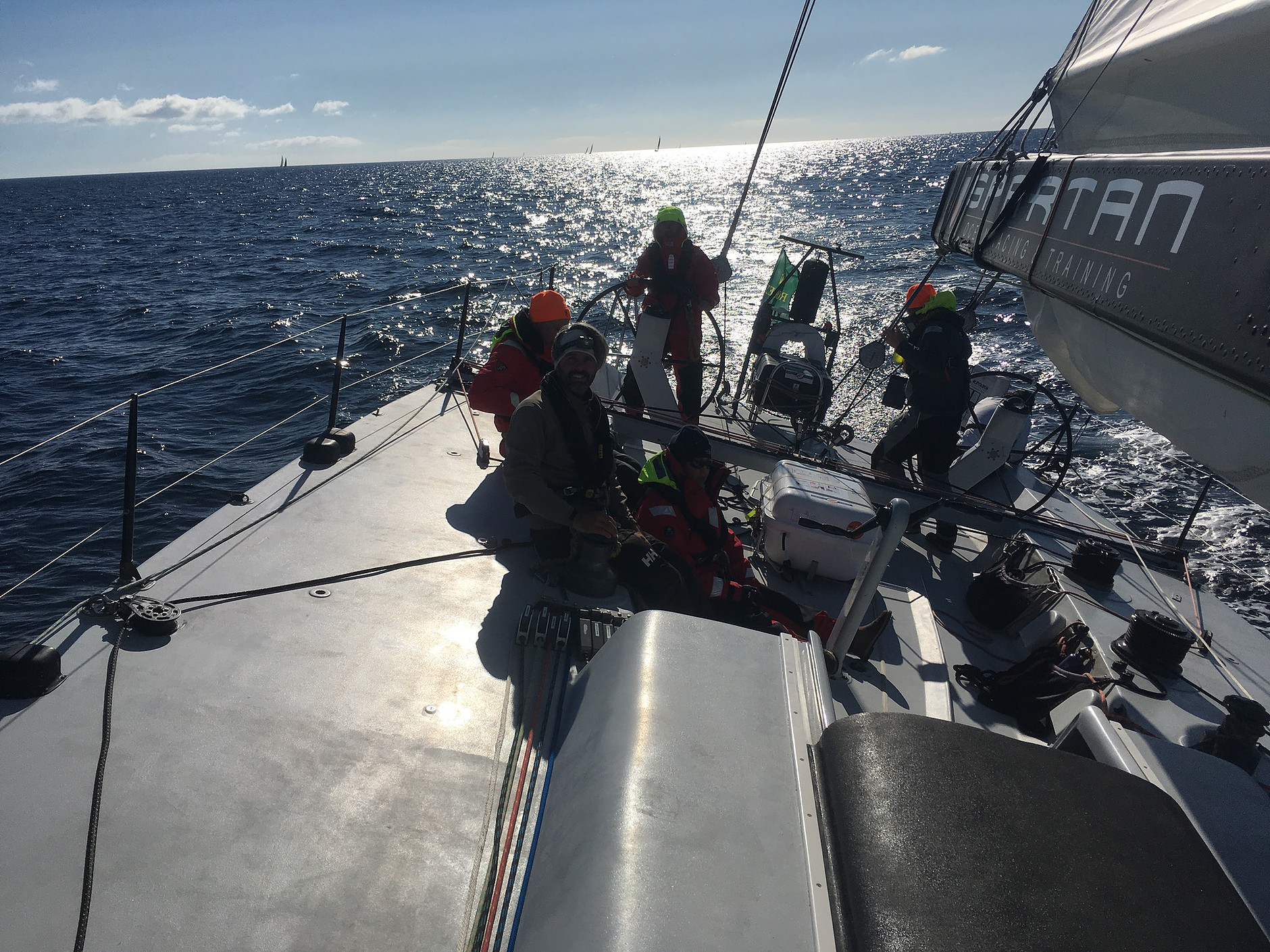 Ok, two down and two to go- the catharsis is already starting to work! Next. For jump three in the time machine- I WOULD NOT go into Lyme Bay (Near Plymouth) with the half of the fleet we were grouped with and would therefore avoid grinding to a stop for 6 hours watching everyone bob past on the outside (including the one boat I wanted to beat -Tokyo 2- another highly comparable Volvo 60). Being becalmed is always irritating but watching the completion slip by 1000m away just puts salt in the wound.
After all these wrongs were put right I estimate I would have dragged our position up from where we were languishing down the field to where we should have been -about 3 hours/ 30Nm ahead. Remember I’m not discussing here how to stick with Privateer or Hugo Boss- I’m just crying over the spilt milk of where we should have been- around mid-field.
Three stops and three hours made up- it’s hardly a car crash so far and by my reckoning there is only one stop left in the Time machine- where to to recover all the rest of the lost time? I’ll tell you where – to the exact moment I tacked us out into the Atlantic heading West and stopped going North just off Penzance. Lordy Lord….
In the subsequent 6-8 hours we went from 3 hrs behind where we should be to absolutely no where, no how, no way. Whilst we were busy going West doing an off-the-cuff mile building voyage everyone (nearly everyone) headed North on a so-so tack that then just got better and better and better all night long until at the exact moment we were beating headlong through 4-5m swells in 30 knots with a VMG of 50-60% every man, woman and child in the fleet was heading directly to the mark on a close reach in 2m swell with perhaps a reef in the main but equally, perhaps not.
There I said it. I went the wrong way. Crap. Now my therapist Dr. Nuvver Beerplease has helped me get over the worst of the pain and I am sure a little more ribbing from very sailor that knows me will no doubt help the hole thing scar over nicely but there does seem to be silver lining in the other wise grey cloud of my soul. Let me explain. The thing is that despite our reluctance to get to the finish line the crew seemed to get along very, very well and are all emailing and chatting to one another about the next time they can come sailing with me (they all feel they get excellent value for money due to all the extra mileage…) Also we have had almost unanimous opinion that it is better to miss out on the silverware and be a fully functional engaged member of a crew on an grand prix boat than to win on a boat as rail meat on. Hmm. People are saying they like that we don’t shout, people are saying that they learnt lots, people are even saying that they want to learn more about the race so they can come back in two years and do it again with more information. So where does that leave me and the monkey on my back?

Now granted, my time machine design and research has hit a few minor road blocks that I am confident I can overcome with time but these delays have certainly given me time to think and it occurs to me that if I put aside just one thing- the result- which only I seem to care about- we actually had an awesome time. People from all over the world (inc Hawaii, England, America, Dubai, Ireland, Canada, Russia, Croatia, Switzerland and Mike Visser) came together, pooled their energy and their efforts and achieved something really cool- we sailed the Fastnet Race and along the way we had a lot of fun, shared lots of knowledge about seamanship and created meaningful relationships that no doubt will grow as people join back up in the future to sail again. It also occurs to me that although we were yes going the wrong way the crew got to experience pitch-black, middle of the night, heavy weather beating at 10 knots in big swell in one of the best offshore upwind boats in the world – that’s a pretty bloody authentic part of offshore sailing! (I am told by one ex-military man that was on board that the experience being below decks whilst the boat is charging through the bigger swells is exactly the same as that created during the submarine depth charge training he did……!)
So, to sum up.. Pure Foolishness? Well, the review says; Get the the main up faster, avoid a halyard breakage, go straight across a bay not into it, go North instead of West – but make sure what every you do people still feel the same – elated and satisfied when the get into port next time. I’ll take that. CSM 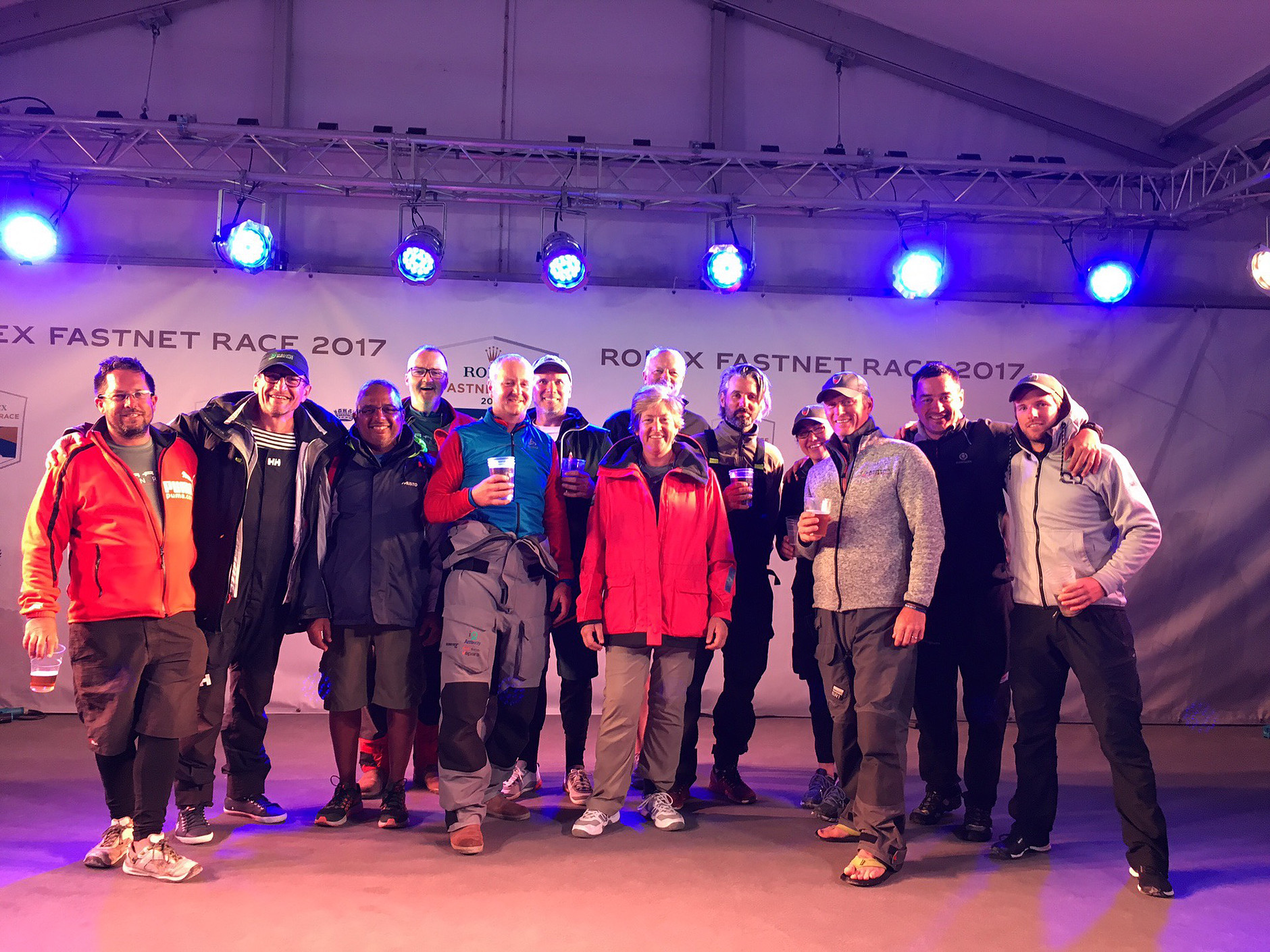