The Newport Bermuda Race is one of the premier offshore events in North America and Challenger was one of only 200 boats invited to attend. After a mad dash North to Newport from St.Maarten at the end of May to make our appointment with the ORR rating measurer after our Caribbean racing season we returned to Newport once again from Nova Scotia on June 14th to have our final safety assesment completed and make preparations for the start. However, the event was not to be that simple- fate had a twist to add when a long range weather model began to show that conditions during the period of the race may be far from benign. The model showed that on day 2 or 3 of the race a strong weather system would intersect with the race’s course that could produce very strong conditions of 65+ knots with 20ft seas- the worry was that the system might even develop into a Tropical Storm. 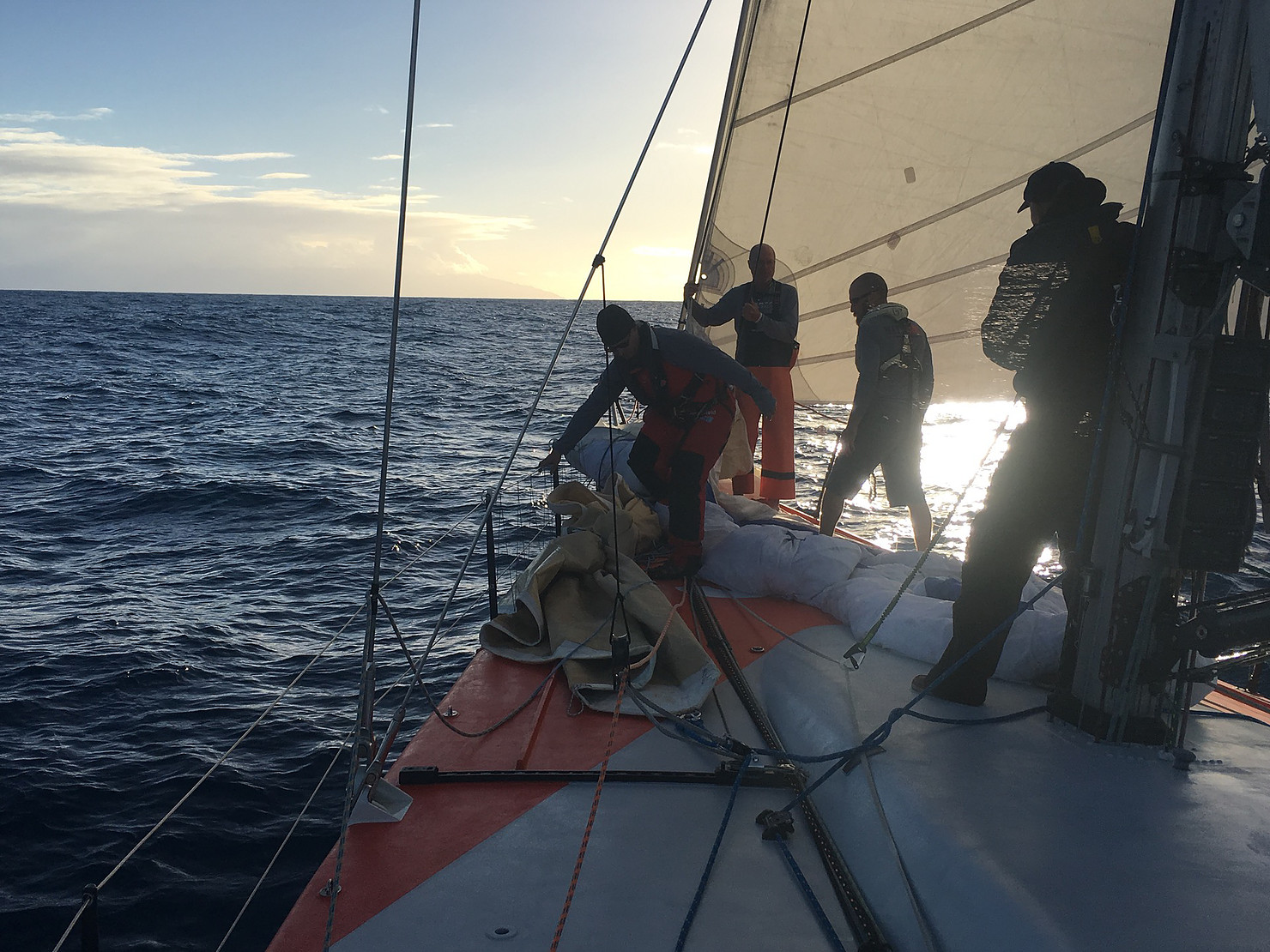 The report I read at 0900 on start day from pro meterologist Will Oxley (Navigator on B52 in the ’97 Hobart Race) included the capitalized phrase ‘ THERE IS NO SAFE ROUTING OPTION’ and to me having looked at all the weather data that comment from such an esteemed source sealed the deal. In the Military there is a saying, ‘if there is doubt- then there is no doubt’ so even before the race commitee made their minds up whether to race or not race myself and the crew of Challenger sat down and made our decision about how we were going to proceed with the information we had before us.
Our understanding of the weather picture was very simple- a low of sufficient intensity to represent a risk to our safety may well be on the race course- therefore our decision was simple- we did not feel we had enough experience on board or indeed the desire to go head to head with it regardless of whether Challenger was built for those conditions or not. Decision made- we would wait 24hrs let it pass ahead of us and then go sailing.
With our own plans made, the race commitee’s deliberations became less important to us and the stress of the day lifted; we were able to look forward to our start knowing that we would be sailing through the line with the rest of our Division then after a few hours turning around and coming back to Newport for 24hrs before setting off properly.
It was exactly the right decision and making it before the start saved us the child-like tendency of second guessing the plan once the temptation to ‘go play’ starts to tug at you. The start was a somewhat curious affair, over 25% of the entered boats did not go to the start line and as we exited Newport ‘Bella Mente’ one of the prime contenders for race silverware was already being loaded onto a ship. Seems we were not alone in our reckoning of the situation.
Our start was at 1640 and of 10 entrants only 4 (incl. Challenger) crossed the line. Although our start was excellent- crossing in a good position within seconds of the gun we hit a slow patch for an hour afterwards as the crew got into the groove of our ‘evening sail’. However, Challenger has legs enough even in that light breeze to make problems for any other boats and after two hours we were leading our pack.

I have to say it was difficult to turn the boat around and watch the remaining competitors head off into literally the sunset with a perfect 15 kts blowing and flat, flat seas but I tried to keep my professional hat on and bear in mind that a few horizons south of that perfect scene a weather pattern was on the prowl that could leave my crew physically and emotionally battered.
The fantastic crew meal we had at the Lobster Bar in Newport and the late addition of Mike to our crew (after the boat he decided to race on also pulled out of the race) were highlights of the event I would not have missed and a good time was had by all. Everyone slept easy that night happy with the bigger picture approach we had taken.
Our Newport- Bermuda experience was extremely enjoyable, Challenger ate up the miles often cruising at 11knots for hours on end under just main and jib with the only bouncy patch being as we crossed the Gulf Stream which is always to be expected.

Each member of the crew got to be as involved or relax as much as they liked when on watch and I was thrilled to see in particular Alison’s helming skills develop over the many hours she piloted the boat- perhaps now when she goes back to her regular ride she will be able to show her regular crew a thing or two:) Congratulations to Burt Apelbaum who showed that 60+ is still young enough to cut it with the young bucks and to Eddie Rankin who at the other end of the scale (16) held his own amongst a much older crew. My respects to Jacques and Joanna who had never been to sea at all and ate up the experience- I look forward to sailing with you again soon and lastly my great thanks to everyone who put in some hours with me working on the boat- adding their own unique effort to what we are trying to accomplish with Challenger and Spartan Ocean Racing & Training.
SO, Newport to Bermuda 2016- not quite what we expected but job done, everyone happy and most importantly everyone safe and well. Sailing like life doesn’t always turn out the way you are expecting but the main thing is to keep your eye on the prize and to adapt and evolve your plan as new situations develop. In the end we still have a lovely bronze plaque to put on the nav station that says we completed the Newport Bermuda Race 2016 (because we still completed the course) and get a load of this… we still came in only 2 hrs behind the boat that finished third in our division.