The Route Halifax St.Pierre Race 2016 sailed last week and Challenger was right there once again proudly flying the flag for Spartan R/T, Nova Scotia and the Ocean Class. We were lucky to be joined on board by some skilled sailors in the shape of Philippe Paturel of St.Pierre & Miquelon and Jeff Brock, a world-reknowed pro-sailor and specifically 2001 Volvo bowman (Amer Sports 1).
The start in Halifax harbour was overcast but there was a decent breeze and the three entrants in the Ocean Class, Esprit de Corps 2, Esprit de Corps 3 and Challenger were all able to make 8 knots easily on a hard beat out towards open water. Whilst Challenger crossed the start-line first her lead was short lived after the ring on the head of the jib snapped (never seen that before!) robbing us of most of our motive power as the jib crumpled towards the foredeck. Quick heads at the bow kept what was left of the sail aloft and swapped in the staysail which was able to take up the load inside 5 minutes and keep us hot on the Quebec boat’s tails. 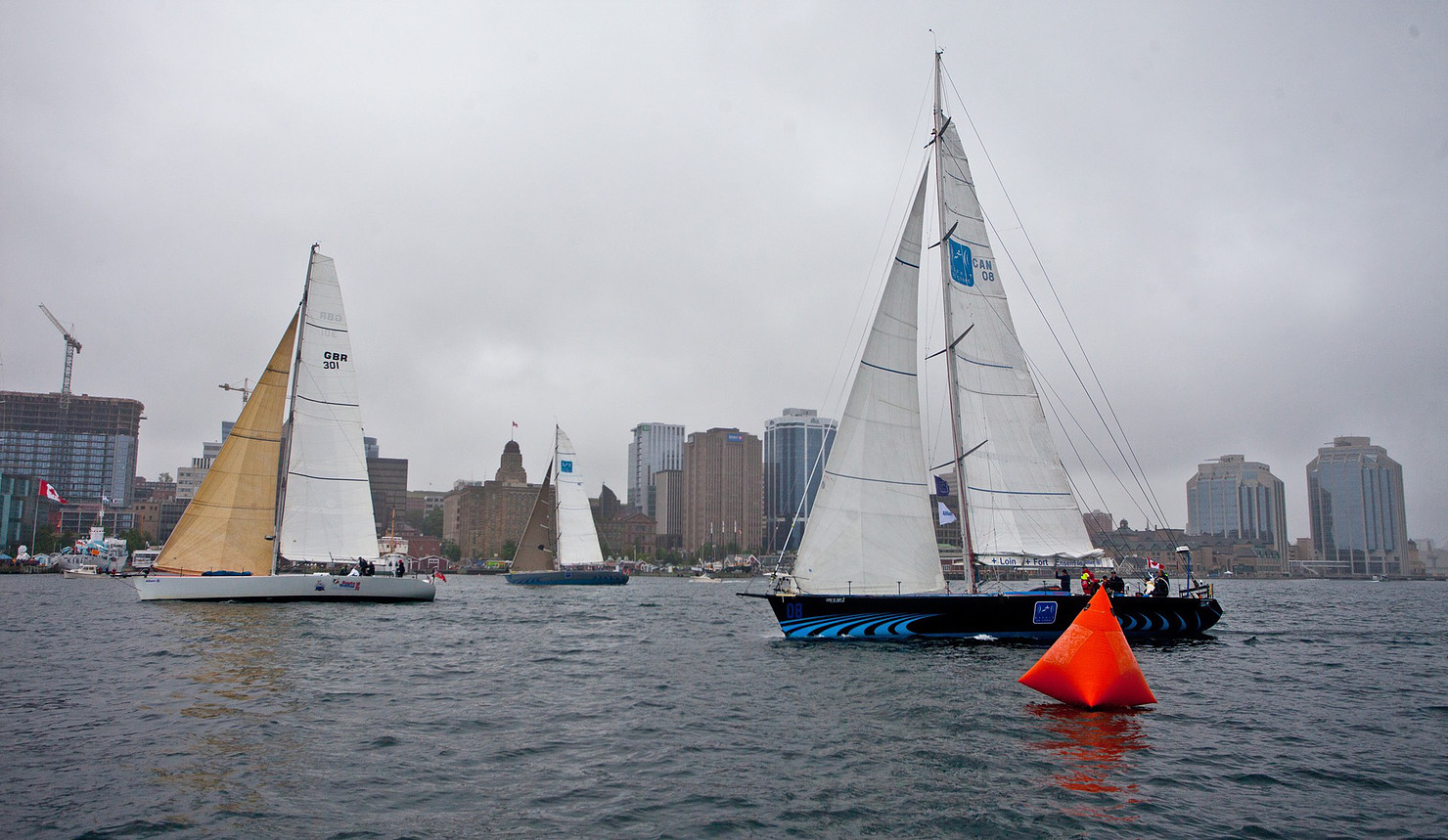 The problem with the Jib however was not the disaster it might have been because the weather quickly deteriorated as we got outside the harbour and we soon plunged into the fog this race is becoming infamous for.
If you have not raced in fog before its easy to describe- go racing but do it with your eyes closed-its that simple- then you will be close to the level of challenge this gruelling little race provides. This year’s edition also had the added ‘interest’ of 40-45knot head winds pretty much the whole way to St.Pierre for the quicker Ocean Class boats.
On board Challenger we quickly got into the rhythm of how things were going to work for the next few days and it was an unfortunate realization for half the crew that the conditions were going to be just a little too bumpy for normal operations. Despite ginger, Quells, Stugeron, Scopalmine, Bucastem and the rest of the go-to remedies for motion sickness many of the crew took to their bunks, battened down the hatches and waited for the quieter waters of St.Pierre… 350Nm away.
On deck the conditions were lively by anyone’s measure and the impression of being exhiled to another somewhat alien, more chaotic world was pressed home by the lack of sun, moon or stars at any point nor any horizon beyond that on the edge of the fog bank about 200 ft away. As 20ft foam-topped waves thundered by as we bucked and slammed our way North at 10 knots through 40knot headwinds the otherworldliness of it all was inescapable.
Below decks the challenge was water- water, water everywhere- after a season spent trying to stop all leaks on board the mast seal started to leak (like a waterfall) sending water from the constant rain, the fog precipitate and of course the waves on deck teeming down into the mast box that then overflowed into the main cabin. Regular bailing kept the trouble within acceptable levels and there was never any worry about the boat’s safety but I think we could have all done with the inside of the boat being more of refuge from the weather than it was. As the dim light of the second day came upon us we spied the Esprit de Corps boats behind us in the murk which gave us a real pick-me-up but unfortunately it was not to be a situation that was to continue.
Despite our best efforts during the next 24hrs the Esprit de Corps boats pulled away from us leaving us an hour behind when the finish line was reached 24hrs later. A pity after such a rough ride and not something nice to wake up to for those who had suffered it out sick below decks.
Was it boat speed, tactics, crew numbers? We are not sure certainly- there was one point at the height of the storm where both we and the Espirt de Corps boats just sailed under jib for a few hours when conditions threatened to become serious with gusts of over 50 knots and each boat suffering in its own way with its own Gremlins. But other than that we all sailed very similar races- I guess in the end as Gilles the Skipper of Esprit de Corps 3 said, “There has to be a winner and a loser but in the end all that matters is that everyone is safe and had a good time.”
I am not sure that we will be noting the Route Halifax St.Pierre down as being enjoyable…. after that ride but it is certainly a MEAN test of seamanship and endurance for any boat and her crew and I imagine that in two year’s time we will be lining up again having forgotten anything other than the fun bits of this year’s race. As my mother says, “The secret to life (and sailing) seems to be good health and a poor memory!”
Our Congratulations to Esprit de Corps for their participation and mastery of the Ocean Class in this years Route Halifax St.Pierre Race. We hope to see them in the Caribbean this Spring for more Ocean Class racing in the Caribbean 600, Heineken Regatta and Antigua Sailing Week.