What drives those who compete in the Rolex Fastnet Race?

Why does it hold such a special place in the hearts of sailors all over the world?

On the face of it, it’s just another boat race; it’s flags in the high street in Cowes, canon fire at Egypt Point, a busy afternoon on the water at Hurst Castle and an overnight drift on the tide in Lime Bay. Surely then Fastnet is just another sports event patronized by a few thousand, followed by a few hundred thousand leaving the sport’s remaining international audience oblivious.

But it’s not; and everyone reading this knows that somehow Rolex Fastnet Race has become much, much more than just a boat race.

Over it’s 94 year history Fastnet has touched hearts, has had more than it’s share of excitement, despair, sadness & joy and along the way become a citadel in the minds of sailors the world over- a place where the traditional ideals of the sport are preserved and demonstrated despite the march of modern design and technology.

For nearly a century an otherwise unremarkable rock spire eternally braced against the savagery of the Atlantic Ocean has become a beacon not only to commercial ships making their transatlantic landfall but to Corinthian sailors making the long pilgrimage out beyond the reach of their normal endeavours; for those who choose to sail themselves clear off the edge of their own expectations.

Fastnet therefore is synonymous with the concept of Tenacity in Pursuit, of pitting one’s self against elemental forces for an illusive glimpse of something beyond mere sporting success – Fastnet is a rare chance for meaningful personal triumph.

This year many of the crew of Spartan’s Whitbread 60 ‘Challenger’ sail in the memory of Stuart Jones the skipper and owner of the Sydney 38 KURRANULLA who passed away this year too early to take the long beat out to Fastnet and reap the whooping, laughing smiling rewards of the long reach home.

We had no illusions coming into this about silverware or records: we hoped only to round Fastnet and that somehow, somewhere Stu would be smiling at the continuing joy of his laughing fellow rovers as they continue to sail for all the right reasons: for the challenge, for the camaraderie and for the sheer bloody fun of it. 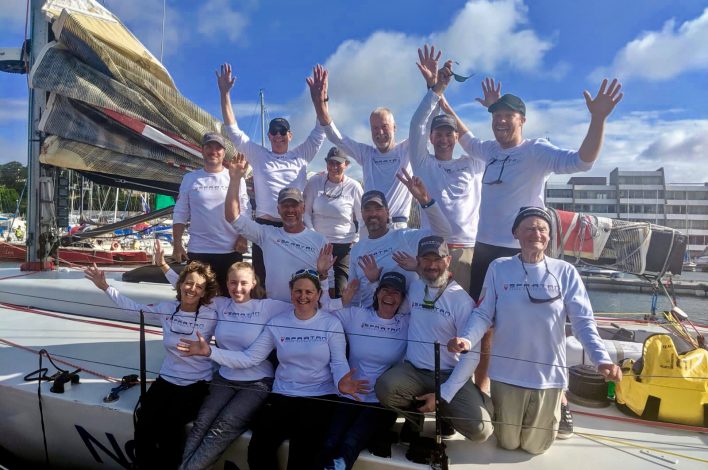